Hartsfield-Jackson Atlanta International Airport (H-JAIA) is the economic engine of the Southeastern United states. Located just south of downtown Atlanta, it encompasses nearly 5,000 acres of land in parts of Atlanta, College Park, Hapeville and Clayton County. Named in honor of Atlanta Mayors William B. Hartsfield and Maynard H. Jackson, the World’s Busiest Airport handled more than 110 million passengers annually before the Covid-19 pandemic crippled the travel industry in 2020. Home to 195 gates that process 2500 flights daily to and from some 225 destinations, H-JAIA is the state of Georgia’s largest employer at more than 63,000 jobs, with a regional economic impact in excess of $80 billion. What began in 1925 as Candler Field – named for the Coca-Cola patriarch and former Atlanta Mayor Asa Candler – has evolved into the most efficient and significant transportation hub in the nation.

As the single most important economic engine in the Southeast, Hartsfield-Jackson has a substantial impact on supplier diversity across the region. A long-tenured corporate partner of the GMSDC, H-JAIA is managed by the City of Atlanta, which has had an Equal Business Opportunity procurement standard requiring at least 35% minority participation in all City contracts since the 1970s. Atlanta Mayor Maynard Jackson was the first big-city mayor to bring supplier diversity to the forefront during his tenure by famously shutting down the $500 million construction of the new airport terminal until the prime contractors agreed to honor the City’s minority participation requirement. Today, the many thousands of suppliers providing goods and services at the airport are among the most diverse in any municipal environment, providing jobs and revenues that enable community development, build wealth and enhance the quality of life in communities of color here in Georgia. 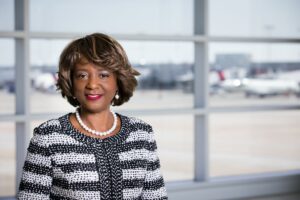 Valerie Nesbitt, the Airport Director, Business Diversity at H-JAIA, is the strategic leader of one of the largest supplier diversity programs anywhere. A veteran of similar roles at Delta Air Lines and the Coca-Cola Company, she is the driving force behind all of the airport’s award-winning economic inclusion initiatives. Annually, the airport hosts an Industry Day, a full day of exhibits, workshops, meetings and networking designed to expose potential suppliers to decision-makers at HJAIA and the upcoming business opportunities there. Three years ago, she pioneered the Maynard H. Jackson, Jr. Legacy Awards, where excellence in supplier diversity is recognized and celebrated each year. Valerie understands better than most what is at stake for such a high-visibility institution. “This airport is unlike any other entity in the region, with a huge footprint and a great degree of influence on the economy of our state,” says Nesbitt. “We embrace the opportunity we have to build on the awesome legacy of Civil Rights and economic inclusion in the great City of Atlanta. Our partnership with the GMSDC is an essential cog in our efforts to offer opportunity to traditionally disadvantaged communities, to ensure that we live up to that standard. I appreciate how we collaborate to engage diverse suppliers.”

Hartsfield-Jackson is in the middle of a multi-year capital project that includes billions of dollars in new construction, technological innovations and improvements to existing infrastructure. By 2030, HJAIA plans new concourses, terminal modernization, runway improvements, new parking facilities and a new ground transportation center. In all of that, Valerie and her team will be hard at work making sure minority companies are at the table and securing their fair share of the work. The GMSDC commends H-JAIA on its long-standing commitment to diversity and inclusion in its contracting practices. For more information, visit atl.com or atlantaga.gov.