Fifth Third Bank is a 163-year-old financial services institution headquartered in Cincinnati, Ohio. The company’s unique name is derived from the names of the two predecessor institutions – Fifth National Bank and Third National Bank – that merged more than 100 years ago. The bank serves communities in 11 states with more than 1200 locations, primarily on the East Coast and in the Midwestern US. Fifth Third is a relatively new corporate partner that has rapidly emerged as one of the strongest and most committed members of the GMSDC family. Known throughout the industry for a strong commitment to enhancing the quality of life in local communities, Fifth Third has had a major impact on supplier diversity since the company first launched a formal program in 2015. The bank has built a world-class supplier diversity outreach in a very short period of time, incorporating proven best practices designed to ensure diverse participation in every bid process, help emerging minority businesses to develop their competitiveness, and assist diverse suppliers in navigating the age-old problem of accessing business capital. Fifth Third has established what it calls ‘bold goals’ for the program through 2025 and has been recognized broadly for its aggressive efforts to create economic equity. 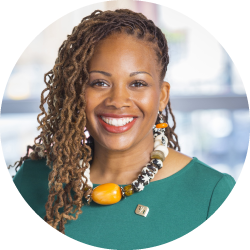 n only a few years as a GMSDC corporate partner, Fifth Third has emerged as a dynamic leader in the supplier diversity space. Marsha Thornton, Vice President and Director of Supplier Diversity at the bank, fully understands the importance of proactive outreach to diverse suppliers. “It starts with developing an organizational culture that believes a diverse supply chain is not only the right thing to do but an integral factor in maintaining the long-term economic viability of these diverse businesses, their employees and the communities they serve,” she says. “Ultimately, we are helping change the trajectory for those who otherwise might not have had the opportunity to compete. Diverse businesses are not looking for handouts. They simply want the opportunity to compete on a fair and equal basis. While that sounds simple on the surface, the importance of that statement is the long-term impact, which can change lives for generations to come.” The evidence of the Fifth Third commitment is everywhere, including the company’s recent support of the upcoming Minority Business Opportunity Week commemoration and its consistent support of other GMSDC programs and initiatives.

Fifth Third is truly putting its words into action on a daily basis through innovations like its implementation of a Managed Services Program model for contingent staffing. With a GMSDC MBE as the MSP partner managing staffing, hiring, onboarding and vendor management, the bank has been able to strengthen its HR practices while freeing up hiring managers to focus their energy on providing best-in-class service to their customers. The incorporation of supplier diversity language into requests for proposals and master service agreements has ensured diverse participation in all procurement opportunities. Recognized as a Supplier Diversity All Star by MBN Magazine for two consecutive years, Fifth Third has received several Buyer of the Year awards from Supplier Diversity organizations and was named Local Corporation of the Year by the GMSDC at the 2020 Spirit of Alliance Awards.

Fifth Third Bank has big goals for its supplier diversity program over the next few years. The plan is to build a more robust pipeline, educate suppliers on the nuances of the request-for-proposal process and support suppliers with technical assistance and training. The bank also utilizes its considerable resources as a financial institution to support suppliers in accessing the capital necessary to compete for the business on an equal footing. The GMSDC is proud of the rapid ascension of Fifth Third as a corporate partner and a supplier diversity leader who is a role model for how to build a strong supplier diversity program quickly. The GMSDC is grateful for this amazing partnership and excited about the future. For more information, visit 53.com.