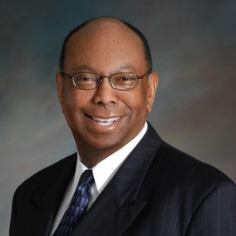 Dr. William F. “Bill” Pickard has been blazing trails across the American business landscape for more than four decades. A native Georgian who moved to Michigan as a boy, Dr. Pickard is the Chairman and Chief Executive of GAA Manufacturing and Supply Chain Management, GAA New Ventures, and Bearwood Management, a Co-Managing Partner of MGM Grand Detroit Casino, and the co-owner of five black-owned newspapers. Now in the 48th year of his entrepreneurial journey, Dr. Pickard is a lifelong advocate for equal opportunity and minority small business development. Ranking among the most influential African American business leaders of our generation. Dr. Pickard credits much of his early success to a schoolteacher who encouraged a young teen whose family had just moved to a segregated Flint, Michigan in the 1950’s. Her concern for his well being planted a seed in young William that would blossom into a lifelong devotion to mentorship and servant leadership. After completing his Ph.D. at The Ohio State University, Dr. Pickard purchased the first of his McDonald’s franchises, and an entrepreneurial powerhouse was launched.

Dr. Pickard pivoted to another line of business after a meeting with Henry Ford II, who urged him to shift his focus from owning car dealerships to becoming a supplier to Ford Motor Company. Dr. Pickard invested in several minority firms that supplied the auto industry, eventually consolidating them into what would become the Global Automotive Alliance. Within a few years, GAA experienced sales in excess of $200 million, becoming the first minority supplier to serve the Big Three Automakers. GAA has grown to be one of the largest minority-owned businesses in the country. Since its inception in 1989, GAA has generated more than $5 billion dollars in sales, with eight plants in the U.S. and Canada, and services corporations such as Boeing, Mercedes Benz, Ford, General Motors, Chrysler, Delphi, Johnson Controls, Starbucks, The Home Depot and Merck Pharmaceutical. Dr. Pickard utilized his business platform to engage in his passions – hiring and promoting minorities, helping minority small businesses grow through joint ventures and partnerships, and mentoring emerging small business owners while nurturing them to sustainability.

Dr. Pickard is also the author of a best-selling book entitled Millionaire Moves – Seven Proven Principles of Entrepreneurship that is required reading for entrepreneurs and business leaders. He lectures extensively at Historically Black Colleges and Universities, sharing the story of his journey and inspiring the next generation of business owners. He is the recipient of countless awards and honors – presented by US Presidents, business and civic organizations and national publications – and has served on the Boards of Directors of many companies, non-profits, banks and business development agencies. Dr. Pickard is a dedicated philanthropist who has made major donations to causes nationwide, including the National Museum of African American History and Culture and his undergraduate alma mater, Western Michigan University, where a facility was built that bears his name. Perhaps Dr. Pickard’s most enduring legacy is a companywide internship program that allows him to recruit and develop the next generation of leaders in plastics manufacturing, while pursuing his passion for mentoring small business people and helping them to thrive. The GMSDC was proud to honor Dr. Pickard with the Blue Legend award at the 2017 Spirit of Alliance Awards gala. For more information, visit gaasolutions.com.